The scene that you saw shows how 2 doctors (Anupam Kher and Madhuri Dixit) are duping Tara Deshpande in the movie Khel. Tara writes a cheque to the 2 doctors for Rs 1,00,000. This cheque is taken by Arun (played by Anil Kapoor) who says that he will be cashing the cheque and giving the fees to the doctors.

What is a Cheque?

A cheque is a written instruction issued by a customer to his bank to pay a specified amount to the payee.

Parties of a Cheque

There are 3 parties to a cheque. The one who writes it is called the drawer. The bank on which is drawn is called the Drawee. The person to whom the cheque is paid is called the Payee. In this particular scene, Tara is the drawer (as she is writing a cheque) and Payee is Anupam Kher and Madhuri Dixit. We can’t see the cheque in the scene so we can’t conclude the name of the bank.

Process of a Cheque

The payee can collect the amount of the cheque in cash across the counter of the drawee bank or deposit the cheque with his bank for collection. If the Cheque is crossed by putting 2 lines on the left top corner, it has to be necessarily collected through a bank. A crossed cheque cannot be en-cashed across the counter. The payee can also give the cheque to a third party in payment of his dues to the transferee.

Format of a Cheque

Above is the format of a cheque. The left-hand side shows the name of a bank and below is the address of the bank that is mentioned. The right top of a cheque shows the date. Cheques are valid for 3 months.

The name of the payee is mentioned in front of the pay, and the line below it mentions rupees that are to be mentioned in words. So, in the scene that we just saw, Tara would have written:

What’s funny is, that Anupam Kher and Madhuri Dixit are actually conning Tara. But the joke is on them as they are posing to be doctors. The cheque cannot be encashed by the bank as these are not their real names. So they might have to go through all the trouble of opening a bank A/c in the name of Dr. Khatpatia and Dr. Jadibuti with all documentation to get that cheque en-cashed.

There are other kinds of cheques too such as bankers’ cheque and multi-city cheques.

Understand Cheque with a Video

What is Inheritance Tax in India? 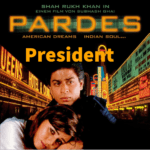 Who is the President of a Company?